So, how is further education doing?

May 06, 2012
After hearing of a well known further education college slip dramatically from grade 1 (outstanding) to grade 3 (satisfactory, which is now no longer). I had one of those mad thoughts as I awoke this morning to look at what the current trend is. I know what you are thinking, he must live such an adventurous life to have such wonderful (ahem dull) thoughts.

Anyway, with bee in proverbial bonnet, I went a looking on the ofsted site, unsurprisingly, it took little effort to find some data within a couple of minutes. I feel tainted to say that this site is very well organised and easy to use. 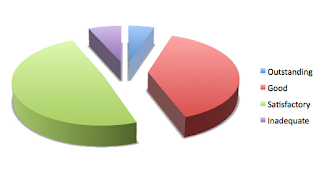 So, not the most exciting read I am sure, but one that at least gives you the facts over 2011. Breaking this down into simple numbers*, in 2011 there were:
So, back to the what I was sharing earlier, what is the trend, well we can see that in 2011, is that at the start of the year, everyone was avoiding inadequate grades, by the second quarter, they started appearing keeping up the pace for the rest of the year.

Now, as an experienced observer, you cannot simply put it down to a sidereal chronology. There is an element of allocation chance and that in a given batch of inspections, there may be more (or less) outstanding or inadequate educational establishments.

The really interesting data is the how the percentages stack. As you can see for yourself, there are more 'weaker' educational establishments than those doing anything like needed for the skilled workforce of the nation.

There is considerable debate over that which is needed and what the ofsted inspectors are capable of finding, the reality is, they look at the data long before they look at any lessons. The grades, overall achievement, student dropout rates always tell an interesting tale.

So, with all of this, my only question is, what does satisfactory look like and what is it doing for the future of those students studying at these colleges?


*The author wishes to note that the figures don't correlate perfectly, as the annual report is based on an academic year (for example, 2010-2011).