Showing posts from April, 2015
Show All

Year 3 and I still like meeting my @OUStudents and @CiscoNetAcad Botswana friends ... 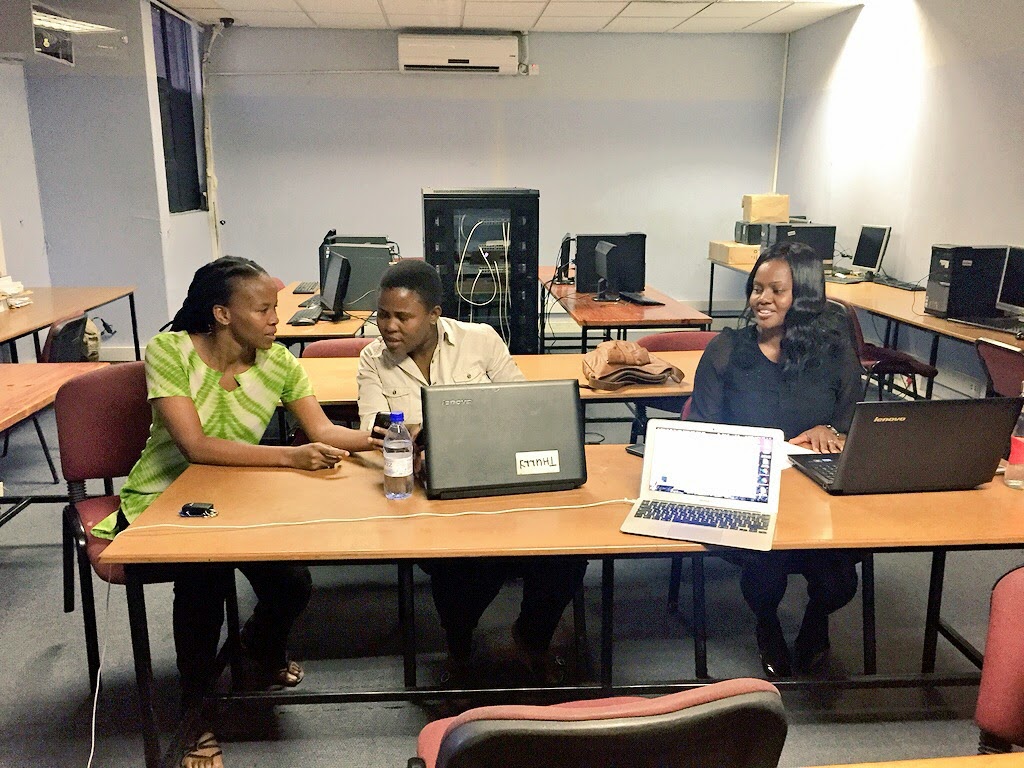 I have been visiting Botswana for three years in a row ... for the uninitiated it is a peaceful nation full of very pleasant souls in southern Africa - north of the nation of South Africa. We seldom hear of them in the western world as they do not have the newsworthy challenges often associated with their two major neighbours. When we started the scholarship project - we had many, now nearing the research project module we have exactly the same number we started the module with.* Ploughing through our MSc at the Open University they have completed modules that match the Cisco CCNP in Route, Switch and Tshoot as well as the CCNA-Security. Already some have embarked on the research module, with a larger wave starting in September and some joining us in early February next year. Every time I meet each and everyone of them, I am always impressed at their sense of fun, yet sincere commitment. They want this MSc, they want the Cisco element. Already some have acquired Cisco certific
Post a Comment
Read more

April 28, 2015
Again and often again, I encounter situations where it is clear that compliance to an unrealistic framework is stifling the real work needed in education. I was given some units to review, reading the comments from the 'compliance' auditor - their pedantry in terms of verb, adverb and adjective usage was contrary to the discipline at hand. They would have cut critical content because the words used by the subject at hand are seemingly incompatible with the terms of the standards framework. Hopefully you are now having a 'for frigs sake moment' ... if not, please get help. When has it become acceptable that a standards framework applied to all qualifications should shape the terms and language used by some very advanced and considered disciplines. Ones that should inform the next generation of students and therefore industry. Compliance in my view is getting a bit silly, please stop it. PLEASE!!! * For exclamation mark pedants - I like using three exclamation
Post a Comment
Read more

April 27, 2015
Having a skype conversation today with someone who needed help with an educational issue which one is more than happy to resolve. I alluded to where I once worked and how we were currently helping them out of a bit of a situation as it indirectly affected their centre. Conversation pottered along quite nicely then they shared an interesting observation - they used to work at another further education college where their head of department would wax lyrical about the place I once worked at. Often promising the team that one day they would go and see this great college at work. Hmmm - with the shit having hit the fan. I did agree that once there was a great college and a great computing team. But left in the hands of a great numpty the college managed to career down a path of its own demise. Sad isn't it - that which was once great is now alas somewhat shite.
1 comment
Read more

If airlines offer in-flight Wi-Fi, they should invest in an extra black box for security ...

Yijun Yu , The Open University and Andrew Smith , The Open University In-flight Wi-Fi is one of the most sought-after facilities for air travellers these days, now that laptops and smartphones are so common and so much of our working and personal life revolves around online services. But a US Government Accountability Office report has suggested that many in-flight wireless networks could expose the plane to being hacked or remotely controlled . In fact it’s of such a concern to US authorities that when a well-known computer security expert made an admittedly ill-thought-out joke about doing so on Twitter, he was promptly arrested, his computers confiscated, and subsequently banned from the airline . And all he was suggesting was to make the oxygen masks drop down. So it would appear that the stuff of Hollywood may jump from fiction to fact: Liam Neeson and Julianne Moore starred in the 2014 film Non-Stop , where a passenger hacking the aircraft’s internal wirel
Post a Comment
Read more

April 17, 2015
Dear academic colleague ... do you write the kind of assignments that you hate to mark. If so, shame on you. Having a passionate dislike for marking more that I have to mark, the more I have discovered that if it takes too long to mark. Chances are it takes the students too long to complete. If it takes them too long to complete, the chances of the assessment fairly reflecting what they know diminishes exponentially over time taken. Has anyone ever measured marking time and compared it to the success/satisfaction of students? While I do not claim (by any means whatsoever) to have created the perfect marking time vs student contribution solution. I am sure there is some form of value index in there. Examinations, can be time consuming at the marking end. Computer marked assessments can be time consuming at the creation end. Essay questions can be quick to create, yet a swine to mark. So, what are your thoughts.
Post a Comment
Read more

April 17, 2015
Sitting on a train, traversing from London back to the shires. Its early rush hour and timing is everything especially on a Friday. There was a 50/50 choice which station I should attempt from my location in London encouraged by the prevailing and essential notion … will I get a seat. Well I did, I usually do, but potluck has its occasional downside. In crowded cities like London, there is an art to knowing the station before the busy station and how to get there quickly, without much effort and probably using the quickest route by foot. Over the years my art has changed depending on the commonplace destinations I go to. Each one worth a little forethought, local knowledge and collective intelligence.
Post a Comment
Read more

My two words are auto and mation ...

April 16, 2015
Is it just me or do I worry about the number of souls who think that social media has to be maintained with a constant hand on the pump. The number of educators, professionals and other souls who I would expect to be more knowledgable are manually crafting each individual update. Really? Worse, when I meet occasional souls who say ... you spend all your time on Facebook/LinkedIN/Twitter how do you get any work done. Erm, hello, may I introduce you to two words: Auto and Mation! Computers were invented to compute repetitive number crunching tasks at a greater speed and accuracy than their sentient semi-evolved creators. Automation has been the prime mainstay of computing since the year dot. So, please help me here - why doesn't social media seem to encourage this mindset, especially amongst educators.
Post a Comment
Read more

Seven Years + and still pleased to have left ...

April 15, 2015
A couple of days ago, it dawned upon me that one had escaped from a particularly well known local educational establishment exactly seven years ago. You could feel the emerging tension at the time. I understand that it became considerably worse over the intervening years. Many I who worked with me have now escaped, many willingly, a couple with a shove.  For a couple of souls who remain, attempt to rebuild the teaching and get a glimpse of its past glory. I do have some sincere respect. However, as each year passes I do continue to count my blessings and celebrate where I am now working. The OU is somewhat eccentric and has its own frustrations, nothing in comparison to where I once worked.
Post a Comment
Read more

The cumulative frequency ogive of despair ...

April 10, 2015
If you are wondering what on earth an cumulative frequency ogive is, take a peek at this site . Speaking to a former colleague this week, whose establishment is in special measures after a series of publicly documented f**k ups by the senior management. They are describing a culture that is now so bent (as in focussed) on lesson observations. That they are not giving any of the staff time to complete mundane tasks like --- marking the students work. Maybe I am a little dated in my thinking, but experience has proven that this one act tends to excite the students more than any wonderfully entertaining and grade one teaching you may offer. At this stage in the academic year, one would be keen to capture what is in their brains so the students may get graded and possibly have credit towards that unusual item that academic establishments provide. Yes, you know, the --- qualification. Experience has seen that when marking is left to the last minute, it is rushed and often incorrectl
1 comment
Read more

April 08, 2015
Compliance and regulatory compatibility has become a greater concern than ensuring that qualifications are commercially, educationally or practically relevant. Enter the compliance police, lacking the charm or tact of some despotic regime. There are no silly hats, snappy uniforms and oversized epaulettes. They rule by virtue of a spineless culture, sapping any value out of the qualification. Like a toothless limpet sucking away until the remaining carcass resembles a set of random words that pretend to feign vocational relevance. Worryingly terms which are meaningful when applied by 'law enforcement' and the 'legal system' cannot be used as they don't use the correct verbs. Really ... hmmm, well f**k me. I would personally be more inclined to be more cognisant of their idea of acceptable, legally defensible practice. Rather than stick to some rigid and less relevant frame work, imposed by the nefarious compliance police. Who in their wisdom seem to be hell be
Post a Comment
Read more

April 02, 2015
I am in the process of conducting some research into 'teaching by social media' if you are one of the many souls that follows my work via twitter or any other platform. Please take the time to complete, it is designed to take less than five minutes. Loading...
Post a Comment
Read more
More posts