The wheels at my university are renowned for being slow and cumbersome. However, getting a simple prepackaged course from a 3rd party with no rights issues out there has been nothing short of escargot'esqe. As of the 1st of May 2017 - we have our first Linux NAL - following the model of the relevant knowledge courses that once occupied the students of the Open University. Offering Linux is not a new notion - having offered for three years a short course in Linux that was at the time ahead of most in reaching a distance learning population. In this short time, we engaged with over 2400 students giving them all a taste of Linux. Now, with the maturity of HTML5 and some considerable insight from NDG and LPI in collaboration with Cisco Systems. We are able to offer a fully remote Linux experience. With the Linux operating system running as a web browser based cloud instance. Our first presentation of this course will have all the hallmarks of a discovery experience - while
Post a Comment
Read more

Using Facebook Live seems to be a good thing ...

For those who are not yet initiated in the project we are working on ... we are 'attempting' to teach over 1000 teachers Cisco (CCNA1) Introduction to Networking. En masse at scale via distance learning so that they can then apply this to their own teaching. We anticipated 100, expecting 200 - however 1000+ was somewhat unexpected. Our plan to use our webex account required reconsideration. Especially as many were now in a situation that they would probably struggle to connect due to local 'school security' constraints. So ... time for a rethink and explore the experiences of our social media live casting research . Lets use Facebook Live (FBL), create a community page and focus efforts on using an external easy to use medium. As luck would have it - we had just discovered how to connect open broadcast studio to FBL. The plan was simple - the teachers covered a single chapter of content per week. A the start of the week - we offered a live screencast lecture/
Post a Comment
Read more

it has to be done Meetings are wonderful, committees are great, I love them as they are so productive. Before you get up out of your chair and call me - concerned that I may be losing the plot. Most of the time I cannot stand the drudge of meetings - however, they are excellent opportunities for a ... Email away day. Why isn't this a thing - a phrase or a bit of slang. During these meetings I open the laptop, listen in to the conversational drone and work my way through all of those emails I would have otherwise ignored. As well as complete the more piffling of tasks assigned by those 'others'. Do not be disarmed - I would rather do anything else. However, if you intend to trap me in a meeting for a pointless duration. I will diminish my emails. I have sat before writing content and updating social media automation.
Post a Comment
Read more

Money for old rope and how this offends me ... 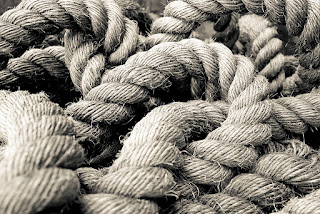 If you unsure what old rope looks like, here is a clearly recognisable image - I hope this makes sense. However, we will not be looking at pictures of rope during this post. That is far too exciting. I am instead going to have a wee rant! I cannot describe in sufficient prose, the ire I feel when I encounter educational establishments that have been paying good money for nothing. To access something that is free and in effect pay money for old rope. I would rather offer an opportunity for free and consider the long term reputation and collaborative benefits. Yet, there are those who can only see the short term income. Solely the income and nothing else. Over the weekend I rescued another educational establishment from this trap. Offering them the same level of service for free.
Post a Comment
Read more

February 16, 2017
Often amongst academics of my erstwhile institution, a saying is bandied - 'we would rather forgiveness, than seek permission'. A reaction to our oft over enthusiastic administratum where the default answer is normally 'no' or you are allowed to do something that resembles a Goat, when you envisaged a Gazelle. To be fair, it isn't a sole malady inflicting where I work - time again I see the same issue, the same attitude (from a few) and the same willingness to overcome organisational reticence. Yet, I must admit when it comes to the notion of forgiveness (in this context) - I feel that I do not desire this either. If I have had to create a workaround solution to overcome an issue that you have created or at least a part of - then to be honest, you are the last person I would ever seek forgiveness from. So, time for a reword methinks ... I would rather 'seize the day than seize your throat', or 'better to try than hit you for saying no'. 'F
Post a Comment
Read more

February 06, 2017
Amongst my peers, we all know someone that I will refer to as "The Sneak" - they can seem perfectly reasonable and charming on first contact yet after a while I would suggest keeping them at arms length as they have a knack of tainting anything good. You get to hear rumours, you get to hear hilarious tales - when the sneak was involved, you wondered how they acquired a teflon undercoat and survived so long. After contributing to a collective fouling and behaving appallingly again and again. It would seem that they have been dumped. Only to appear at another unwitting college within a momentary blink. How do we know - students who had left one college because of this sneak are aghast to see them reappear at their new college! Our sneak is no friend of mine and those who work closely with me on national (and international) opportunities. We are amused to see that they also applied for a mass training activity. Really, did the sneak think that we wouldn't notice. En
Post a Comment
Read more

It is not about buildings ...

February 01, 2017
Recently I visited a Cisco Academy in London - located in what I can freely describe as a humble environ. However, the quality of the kit and the skills and motivation of the teaching team put it all into perspective. It really isn't about the buildings. Yes, in other roles - I have been to centres boasting the best/shiniest/fab new builds. Yet from the resource and mindset of those involved. I think that the modest building and the excellent team beats a pretty site any time.
Post a Comment
Read more
More posts