Showing posts from May, 2016
Show All

Periscope persistence and the steaming wars are game on …

May 27, 2016
Well that was no surprise – first Periscope, then Facebook Live a year (or so) later. Wait and lo, in a short period of time, Twitter update their service to offer resources that duplicate some of Facebook's offer. So – the battle is on! I am still undecided which is the best, in fact I am now inclined to take the view that they are becoming audience specific. The hard part is to critically compare the two in similar terms. I have done a series of short sessions on both platforms – at different times of year with different affordances. Both had the same pre-messaging and both had good audiences. I almost need to do both - more or less at the same time to both audiences on a short sequence (three topics). Pitch one at X-o’clock and the other at Y-o’clock or both at the same time but on different weeks (one week apart). Same subject, same tech, same delivery (as best as I can) then compare the two sets in terms of participation a week later from the delivery d
Post a Comment
Read more

For the last week I have been a guest curator of @PeopleOfUK ...

May 22, 2016
Many who follow this blog - view me via the lens of my work at the Open University dabbling with social media and teaching Cisco Networking. For the last week - I have been the resident curator of PeopleOfUK . What is @PeopleOfUK - in my own words every year 52 volunteers get to take charge of an account and blog about themselves - what they do, where they are etc. Keeping it honest, clean(ish) and avoiding being too promotional. A great idea and an account that I have been following for about two years. I mixed in some of my automated social media techniques with live social media outputs. Nothing new there. I also did a couple of Periscope sessions, shared a well known poem by Twitter and some pleasant photos (well I think so), You get to chat to others - discovered that someone I know also follows this account, much to their surprise. To be fair, you must commit to putting out two/three tweets a day - personally this is not difficult. My other accounts were all running to t
Post a Comment
Read more 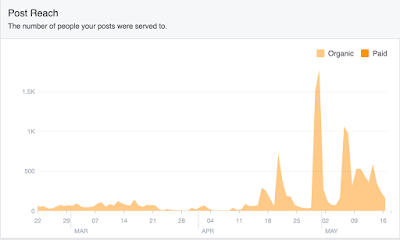 Having completed a series of Facebook Live (FBL) activities on our OUCisco Facebook Page - after waiting a little while, allowing numbers to both accumulate and settle down. I have been able to collate some initial figures. This is by no means even a remotely scientific process - one has to rely on what Facebook say and also the bias in the self selecting nature of the participants. Of course, I am also biased as well. First, lets look at reach ... Post Reach for @OUCisco I have deliberately included March to indicate norm at this time of the year. - the campaign started in late April and the period between the 9th - 13th of March was the focussed period of delivery for the FBL sessions. Next, let us look at the video views ... Video Reach Not bad (we currently have 555 likes) - which means that we are getting out there. The worse performing are more technical than the better performing also I wonder if there is a Thursday/Friday factor as well? That said, the nature
Post a Comment
Read more

May 16, 2016
The mad idea was to create a sequence of short teaching sessions, structured via social media and using social media video streaming. Namely via Facebook Live  - I have hosted five sessions: IP Addressing  Static Routes Subnetting and RIP Intro to OSPF OSPF DR/BDR Election If you wish to watch all of them, they can be seen via ... however, below is the latest. So far, FB Live is tickling my interest. The ability to reuse and its persistence compared to Periscope is ticking many boxes. Later this week I plan to share a review of each video, pros/cons and an analysis of the hits per video.
Post a Comment
Read more

May 10, 2016
There is a debate rambling along on our corporate social media platform (Yammer) – someone spotted some excellent advice from GCHQ advising against having corporate password policies that force the users to change their password at too frequent intervals. Once the user has realised what this entails they will create the following password structure … MagicWord99 99 represents any number between 00 and 99 and I am sure that if they have worked at organisation X for long enough they could make the leap to three digits. The problem is that if an older password is compromised – for example via a key logger that managed to get by all anti-malware security (which they can do). The password methodology is revealed – you may have changed your password to 99+1. Yet the attacker still knows your password, in spite of corporate policy. The same applies for the encryption of USB – not that we are conflating two different technologies. Forcing full encryption and password protection of USB drive
Post a Comment
Read more 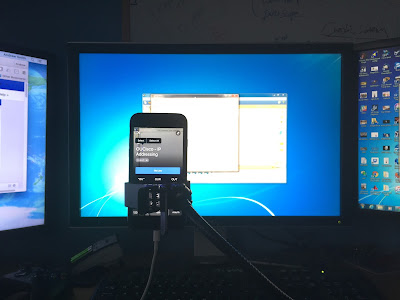 Clamping the smart phone First attempt - covering IP addressing and we survived. Never work with animals, children and IP based technology. As eggs are etc, half way through my first attempt Facebook Live threw me out and I had to quickly get it restarted. One wonders if this is a recurring issue. Overcoming the emotion. It worked, but my immediate observations are: The square screen steals a little useful screen space. I need a phone clamp with greater rigidity Consider the display and the colours used for the command line interface More tomorrow, I will accumulate ideas and experiences.
2 comments
Read more
More posts