Showing posts from July, 2015
Show All

Contrary to popular misconception I am not anti-Microsoft (well not too much) - I am sitting here on my Windows 7 machine typing this blog entry while a mac book air is next to me playing music and I have a Ubuntu Linux Virtual Machine going through the final installation steps. The reality is Microsoft have not done themselves any favours when it comes to Operating System continuity - there are still many corporate and home users the rue editions like: Windows ME - I recall watching a colleague install this, bugger up their machine then roll back to Windows 98. Windows Vista - this version became a swearword amongst many teccies - this version in part helped Mac OSX look slick and Linux seem sane. Windows 8 and 8.1 - if Vista was bad, then 8.x was dire - I recall trying to solve a simple problem for a friend on it - giving up and installing chrome. Getting Internet Explorer to do anything useful was beyond me. I am sure they have their fans - not that many would admit to th
Post a Comment
Read more

Up Periscope and away we go with @CiscoNetAcad ...

Forgive the corny title - it was one that I couldn't resist. For those who follow my many tweets on  @teraknor  and  @OUCisco  amongst other social media outlets. You will know that I have been conducting some experimental  #Periscope  sessions. Covering some based topics on Network Routing focussed around the Cisco Networking Academy programme. To reuse the cliche, the subjects are not rocket science, static routes, RIP and OSPF basics are nothing clever in the world of networking. What is more interesting and of considerable value within the domain of social media is the ability to create a synchronous (live) event - broadcast it from your smartphone and allow others to watch it live. As well as recorded (asynchronously) for up to twenty four hours post event. Better still ... the recording remains on your shiny smartphone allowing you to edit, upload, annotate and do other stuff with it.  Geekiness aside - as an educator I am very brand aware, I work within the Open
Post a Comment
Read more

To the nice people at Periscope (I am sure you are nice), comes my plea for Landscape on your periscope platform. That simple flip of the aspect will be a wonderful bonus. Since you stepped into the android world - we have been periscoping experimental sessions teaching nice enthusiastic networking geeks how to do clever and suitably nerdy things on networks. Using smartphone, tripod and computer we are zooming in/out, typing and trying to fit our work into the unusual world of portrait. Portrait is great for people, places and situations - terrible for screens, tech and nerdy things. We do not know where it is on your things to do list, but would love to encourage you with our appreciation of the platform. We are building up a small but enthusiastic following wanting to learn about routing, static routes and configuring stuff. It would be so much nicer if we could get that command line into the whole screen rather than have to wiggle the camera around on the tripod while typi
Post a Comment
Read more

Predicting the future of technology ...

July 23, 2015
In many professions, there are the 'dumb questions' that others ask of you. I am sure you know of many you have encountered over the years. Avoiding all the typical questions like which is better Windows or Mac or will you have a look at my computer ... one question that recurs that is most annoying is: What do you think is going to come out next? Or what advances in technology do you see in the next X years? So here is the answer I give ... "everything always gets faster and smaller, I am sure you will be surprised by what can be fitted into less space". But, this is what I think ... "What a dumb ****ing question, how the **** would I know - hey let me get out my crystal ball and foresee what Apple are developing next?". One hopes this helps ;-)
Post a Comment
Read more

Lots of noise from those that do not ...

July 21, 2015
One is busy watching a thread on a private social media platform at the moment. The discussion is about the visibility of academic staff at my university. I am beginning to become very amused as the debate heats up between those l have never heard of not have ever seen out there. The discussion around academic visibility seems to be less from those who are actually visible and rather them who would like to think that they may be. The same seems to be occurring on another platform, regarding social media - again I cannot see many who are actually 'really' active - I have bothered to check. Supposing that social media is a great democratizing agent - then you get to see the conversation not the action.
Post a Comment
Read more

To date I have been invited to two very different twitter chat events, both run on similar terms but for entirely different communities. Recently I participated in a #ciscochat  ...  In January I was also more directly involved in #FutureLearnAsks  with none less than Cory Doctorow ... The experience was broadly similar - both on the ringside (as an invited participant) and in the centre (as an invited expert). While there are timed tweets to generate the questions it rapidly becomes a broadcast fest - rapidly escalating beyond the scope and range of the conversation thread being curated. To actually keep a track of all conversations is impossible, the screen flies up and the hashtag and retweets/favourites soon become lost in the maelstrom of tweeted utterances. As a singular remote participant, you get a Starling's view of the chaos as everyone is flying in assumed synchronicity. Yet it works - and something to exploit in the future. With storify and other int
Post a Comment
Read more

July 15, 2015
The social media team will be busy tweeting today as part of their twitter chat for the UN World Skills Day. They asked me to share how we teach Cisco Networking 'skills' at the Open University. We have adapted the Cisco Academy programme to fit our blended distance learning model; where 400-600 students study with us each year on the CCNA , CCNP and CCNA-Security . Keeping it straightforward, we observe three P's, practice, principle and professionalism. Practice: We ensure all students gain practical experience, through extensive use of Packet Tracer and remote labs on live Cisco technology via Netlab . This is supported by four bespoke day schools, each designed to condense the lab activities and present a practical experience. Principle: The Cisco theory and engineering challenges are all wrapped up inside our own assignments. We have taken the skills based assessment alongside the chapter and final exams and created a harmony of continuous assessment using
Post a Comment
Read more

July 03, 2015
Around eighteen months ago the Open University became a Cisco ASC (academy support centre) ... keen to help support Cisco Academies that have been struggling in the current educational climate in the UK and offer an academy that could do this without the cost expectations of the more traditional model. The problem was threefold - Cisco Academies need a route to enter the programme without the upfront costs or risks. Consider this a try before you buy. When the Linux Essentials and Internet of Things courses came online there was suddenly a route where we could enable academies to operate with instructors who did not require training in advance. Our former ASC was about to collapse due to corporate reticence. The Cisco Instructor leading this academy, is considered to be a very capable soul and still had a number of academies who would prefer their support. There are some academies out there, operating in charities or centres with a specialist student base that cannot afford
Post a Comment
Read more 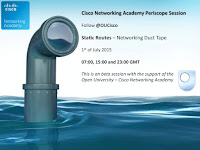 In a fit of academic madness, I decided that when Periscope  was available for both Android and Apple that it would be time to experimentally use it for microteaching Cisco Networking topics. Periscope is a live streaming / video casting service using your smartphone. With a little support from some twitterati friends, we started pushing a graphic (to the right) promoting three sessions on the 1st of July 2015, at 07:00, 15:00 and 23:00 covering the subject of static routes. The times were important as I could both stay awake and also cover most global time zones. The subject, I decided needed to be simple where I could introduce one clever command. You can see the videos via ... as Periscope only retains the video for 24 hours. The first challenge was holding the phone, to solve this issue, I purchased a bendy phone mount that clipped to my desk. By putting the phone between me and the screen, it enabled me to type while the camera was in focus. It reduced the shaky cam eff
Post a Comment
Read more
More posts