Showing posts from January, 2014
Show All

January 26, 2014
Somehow my fevered mind has turned to the idea of creating a game, probably one that will run on something webby or appy for a phone and stuff like that ...

This game could be platform based, where you have to combat different assailants. Nothing unusual, this has been around since the 1980s at least, maybe earlier. But instead of your typical aliens we will go for something different; this will be all the souls attacking education and teachers.

Like the idea, we have to decide on the premise, but think about it you have ...
Gove!Wilshaw!Ofsted InspectorsAcademiesFree SchoolsLeague TablesAwarding BodiesSATSParents Different GovernmentsChanging targetsPoliticians in generalHunt!Local AuthoritiesCeleb ChefsPower hungry head teachers and their senior leadership teamsSchool GovernorsNew schemes, initiatives and interventionsThe press and the media at large ... all messing about with our education system.
I am surprised that no teacher has gone loco on us. Maybe it is because they are prof…
1 comment
Read more

Paper chase at the quick-car-tyre-fitters ...

January 24, 2014
Sitting in the local quick-car-tyre-fitters, listening to the banter. There was someone in from their head office, listening to the ‘lads’ share their joy at the quality of the new paperwork.
If they had a point or not, isn’t for debate. It was more a thought based on the quip of one of the technicians … why isn’t it on a single sheet anymore?
When you followed the gist of the banter. They did not struggle with the idea of completing paperwork. They were more emotional at how it had suddenly become more complex and was slowing down a job that is based on speedy (and timed) delivery.
Salutatory … and worth considering, it is often those that do not do, nor sit in the pilot seat that generate most of our paperwork; I often marvel at the irrelevance of paperwork in education, my workplace no exception.

January 21, 2014
In the second world war it was called make do and mend, in other eras the word was thrift, yet now we have life hacks?
Really, I mean really. I have known of the phrase for a while, but somehow could not bring myself to find out more. Now that I have, I am sure that somewhere a kitten has be subjected to a rather horrific demise involved some life hacked flip flops and an electric hand whisk.
Ok, we all do it; I have come up with my own technique for opening jars. Its not rocket science. Simply take the offending jar lid and tap it firmly (but not too hard) against a hard surface, such as a wall. The action will normally break whatever vacuum seal was in place or move the thread that was on too tight. Net result is that man can look impressive in front of woman and assert primeval right to grunt, beat chest and encourage despairing look from female.
But I am sure someone got there first.
Things that sort your pencils, doobries that make life a little easier. I am sure that in the UK,…
1 comment
Read more

In my biased opinion, the success of anything in commerce, entrepreneurship or education comes from a delicate combination of the two. In reality one cannot come without the other.

So, it is sad to see an inheritance I left to another, 5.5 years ago; something that was running at its peak with a strong throughput of students. Recognition, status and three awards to its name now a shambling husk of its former glory.

Someone wanted the kudos but did not seem to understand how to own this; often talking a good war, they never served up the strategic thinking.

Equally, looking at a local college, it was in a very healthy state back in 2005, by 2008 it was beginning to creak, now in 2014 it is being investigated. The key factor, change of leadership and different ideas of ownership.

January 20, 2014
To assure as well as ensure compliance, today I completed some ‘workstation safety’ training for work. A standardised experience, I apparently completed the last session in 2012. Not that I can remember this.
Using an external company I completed a twenty minute educational experience that would be described as cramming too many facts to as little detail in such a short time.
The muscular and skeletal detail was impressive, but in my biased/cynical view added nothing to the purpose of the exercise. Which, wait for it, was to get an external party to encourage me to tick an internal compliance box.
One fact that did amuse me was I ticked three boxes, one for the use of smart phones, another for laptops and a third for users of double displays.
Apparently I must refrain from spending too much time typing on my smart phone. Well, lets go figure, mainly because it’s bleeding awkward. There was mention of tablet devices in this resource, which is interesting as they have now been pervasi…
Post a comment
Read more

January 19, 2014
Often I wonder why we are so obsessed with data in education ... from face-to-face into distance learning I am yet to be convinced that knowing more about what we do actually helps improvement.
Even when data is used, it would seem to me that the majority of times that improvement is needed. It comes from: InstinctPersonal preferenceLeadership influence In fact, often data is presented and improvements are made that worsen the experience of the student community. As the above list is based on bias, if instinct is wrong, personal preference biased and leadership ignorant. The problem predicted by data, either was never an issue or the issue (if there was one) differs from the perceived view of the problem.
Then the real problem arises, when data is everything and instinct is abandoned. Whilst instinct is fickle and still subject to my cynicism, I prefer this to blind reliance on data.
How does your educational organisation work, is the culture capable of allowing experience to override…
Post a comment
Read more

January 13, 2014
I have been playing around with some location based automation in IFTTT recently. I am sure some of you who follow some of my different feeds may have noticed. In itself, there is nothing new to report. But in my fevered and somewhat technical mind, there seems to me to be the potential for many organisations to capitalise on 'presence' awareness.
The tool available via IFTTT, currently works on iPhone; ironically I don't see any android resources, but I am sure that if I did a search I would find similar.
However, getting back on topic. I work in a culture that has a dispersed team. Often you want to know if someone is 'around for a chat'. That informal and quite essential process where coffee, ideas and opportunities evolve.
Options include the internal Lync chat, but relies on them being available at their desk to respond (not often the case on campus). Getting off rear and looking for them, phoning, leaving voice mail. To still discover that they are not in.
S…
7 comments
Read more

January 11, 2014
For those poetically included, a homage to the master of nonsense Lewis Carroll ...

Our trouble is unlike this renowned rhyme,
is that the fool Gove has plenty of time.
Even worse, is that on the opposite side.
The bigger fool, Tristram is helping thee.

The reality is that the damage is done,
Governments come, go and again come.
Each time, another policy is in place,
Education becoming a national disgrace.

Just then flew down a monstrous crow,
As black as a tar-barrel;
Which frightene…
Post a comment
Read more

Copy Protection: Where there is a will ... 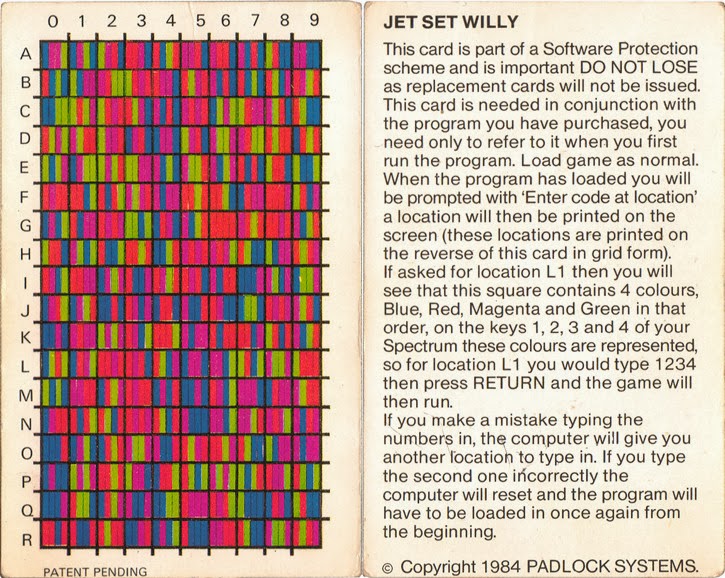 May I introduce you to a copy protection mechanism from 30 years ago (to be almost exact). Time travel back to 1984 and Jet Set Willy.

At the tender age of 15, a group of school chums and I were part of the 'computer club'; yeah I know, how geeky is that. Apart from being geeks and learning how to write programs. We had quite a prolific software piracy ring going. Most of us had Spectrums, so would be keen to trade, copy, blag, borrow etc.

Then Jet Set Willy appeared, with its ... code sheet (see below).


It was designed to stop photocopies, as the norm was black white. Digital cameras were not around and taking a photo required the cost of developing the pictures. Which meant it was just as cost effective to pay the £5.99 for Jet Set.

So, lets introduce the £0.20 exercise book; the will power of the school child's mind and off we go. One one of us had Jet Set Willy, we would copy the codes into our exercise book then trade the opportunity to 'copy' this.

So if they are doing it; should we?

January 03, 2014
In education, the frightening answer is NO!!!! Do not try and do what others are doing. If it is no longer an original idea the reality is the market quickly becomes saturated. Yet, lacking imagination and unable to take the lead. I have often seen trend setters compete with trend followers.

If you are able to set the trend, you can rely on the reality that you can move onto the next opportunity long before others have realised what you are up to.